A little over a decade ago, I decided to take a very close look at the personal tax return that my accountant prepared for me.  After scrutinizing it very thoroughly, what stuck out most in my mind was the recalculated dividend and capital gain rates after they went through the Alternative Minimum Tax (AMT) meat grinder.  Having worked in money management for many years, and incorporating the trade off between selling a security or not based on its being classified as a short term versus long term gain, as well as stressing to individuals the importance of the latter in their total net returns, I was disheartened to see that the “advertised” number of 20% or 15%, really did not apply to many individuals previously categorized as High-Net-Worth(HNW).  Back in the early 90’s, if you had a million dollars in liquid net worth, you were considered wealthy.  Though that number is laughable today, security sale decisions were based on the assumption that an individual was in the highest income tax bracket of 39%.  Thus having to pay only a 20% rate, or even better 15%, was a huge incentive to wait it out.  But the reality is that the advertised and politically trumpeted number of 15 or 20, is only applicable to the extremely wealthy.  At the lower end, the poor and middle class have minimal savings outside of their pensions and 401k’s.  Let’s be realistic: how much is a family of four making $100,000 a year, or even $150,000, going to save after taxes???  Thus they are not really subject to capital gains/dividend taxes, whatever they be.1  At the lowest income levels, there are no cap gains taxes, nor are there likely any cap gains, or capital for that matter.  But just when you squeeze into the upper middle class, and finally are able to accumulate some discretionary income, that is when the government throws you a curve ball to keep you in line.

How do I know this?  In addition to the scrutiny of my taxes mentioned up top, back in 2006 I came across an incisive article written by a business professor in California named Edward Mcquarrie which confirmed all my fears.  The math in the article is head spinning and difficult to dissect, but that’s not Edward’s fault, it is exactly what the government intended.  Think kafkaesque.  If you don’t want to read it, one line says it all: “The government has reserved a special place in tax hell for affluent families…” 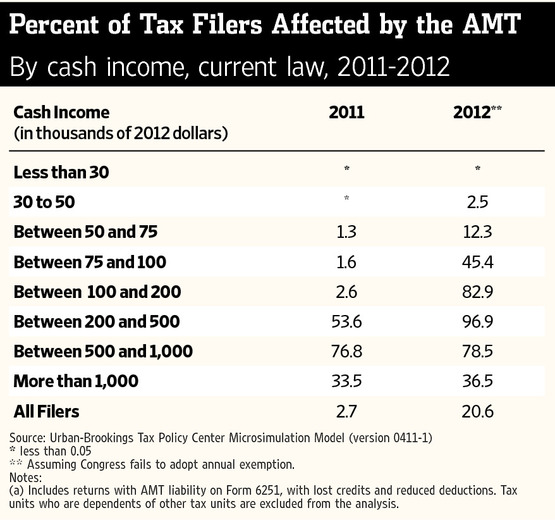 Here’s the rub, while the uber-wealthy also get caught up in the AMT, it only affects them on roughly their first 1/2 mil, so if you make 10 mil a yr, it’s only 5% of your total income, the other 95% gets the 15% treatment.  Per the Mcquarrie article “This creates a hump-backed tax system in which the highest rates apply to those unlucky taxpayers in the upper middle of the income distribution.”  The chart above from 2012 illustrates it perfectly.

President Bush was advised of this when the deduction was put forth, but this wasn’t his constituency, those making multiple 7, 8, and 9 figures were. In case one thinks I’m throwing politics into this and taking sides, you obviously didn’t read my first post regarding affordable housing.  If you learn anything from today’s lesson, then it should be that what the Republicans deceptively taketh away, the Democrats joyfully redistribute.  In the upper middle class you have no friends in politics.  Until TheShadowBanker came along…

This site uses Akismet to reduce spam. Learn how your comment data is processed.